If you are going to play Arulco Vacations and want to be surprised don't read this page. 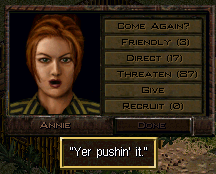 A relatively easy but major Tweak concerns the terrorists. Carmen Dancio, International Bounty Hunter, will approach your party at some point and ask for help in eliminating 6 terrorists thought to be hiding out in Arulco. The country being a friendly place to hide out if you are running from The Law in other countries. 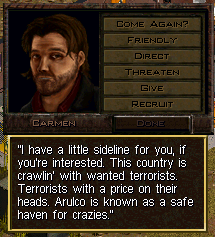 The Arulco Vacations Tweak sets the .INI so that all 6 terrorists are in the country. Still, hunting them down singly results in, what I think is, six very anti-climactic fights. A single person doesn't stand a chance against a squad of heavily armed mercenaries. So . . . 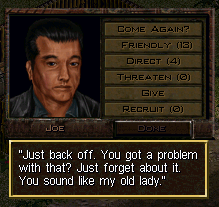 The terrorists have been in the country for a while, and through a series of fortunate events have met each other. Their notoriety precedes them, and they recognize the undeniable fact that they would be better off helping each other than trying to survive alone. Pursuant to this goal 5 of them decide to reside in Chitzena together. One, Sammy "Charlie" Elgin, The Druggist, has decided to stay in Grumm and be the eyes and ears of the group regarding national and international developments that concern them. Besides, any bartender that isn't one of the quintuplets is OK by me . . . but I will keep a close eye on my drink around this one! 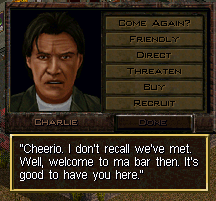 The other 5 live their undercover lives in Chitzena, a backwater town of no importance now that the Queen has destroyed the tourist trade. As well, the national treasure and main draw for tourists, The Chalice of Chance, has been stolen by the regime and put on display in Balime -- the rich, resort town on the opposite coast. Nobody in Chitzena suspects the foreigners are anything but what they claim to be, and indeed, welcome the extra cash the 5 put into the local economy. So the locals don't ask many questions -- it's how you stay alive in Arulco. For v1.04, Jasmin (aka T-Rex) has continued his career of training insurgent militias by radicalizing the indigenous population in Chitzena.. You will find that the terrorists have more help now. Hopefully, for v1.06 I can figure out how to make them all be possible allies as well as possible foes. 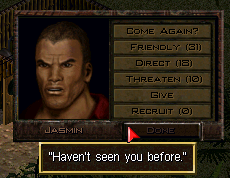 When you confront and attack any one of the 5 the fun starts. They will defend each other so the resulting fight isn't 1 terrorist against your squad, but 5 plus the militia. The fight is a bit more interesting now. I have also tweaked their attributes, Skills, Traits, Backgrounds and Gear Kits a bit to be more in line with their biographical descriptions. 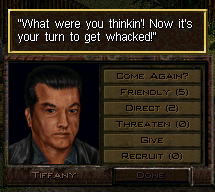 Well, OK, maybe 4 or 3 (and militia . . .) against your squad . . . y'see, some of these terrorists ain't so brave. Under certain conditions 1 or 2 of them will run away while you kill the others . . . or attempt to talk their way out of it with you afterwards. Yeah, those are the ones that really deserve to find their way to Carmen in pieces. 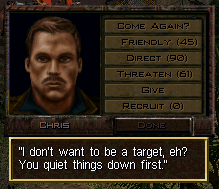 There's more to consider than just fighting the 5. If you attack those 5 then Sammy/Charlie will hear about it -- as news of your exploits travels fast in Arulco -- and he will attack your party on sight. No problem, you say? 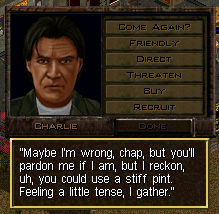 Well, there's a tweak there too. Sammy/Charlie, also known as The Druggist, mixes deadly cocktails in a bar in Grumm. He now also sells drugs under the table -- all the drugs in the game plus those invented for Arulco Vacations. If you kill him you'll get his (meager) current inventory, but that's all. His replacement, Manny, (the idiot of idiots of the quintuplet bartenders) has his own inventory of saleable items -- which is simply food & drinks. Arulco Vacations does not use the new Food System, so there is no need of buying anything from Manny at that point in the game -- even if you could trust it to be safe to eat. 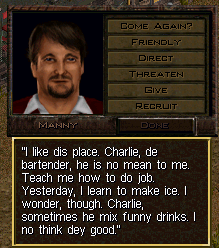 So the Player has a choice to make. Kill the terrorists and make a quick buck from Carmen, but lose the opportunity to purchase life-saving and battle-enhancing (though dangerous) drugs from Sammy/Charlie in Grumm -- where the battles with the Queen's Army will be intensifying to an almost impossible degree. Or let the terrorists live, and use Sammy/Charlie's expertise in medical and enhancement drugs (including dart guns and darts . . .) to keep your squad alive and kicking. 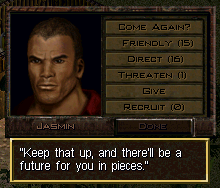 Or wait until just before the end-game to have a nice fight -- at the point you don't need The Druggist anymore and want a little warm-up before the climactic battles in Meduna.

Hey, after all is said and done, these terrorists are not any worse than your Mercs -- they just got caught failing on the wrong job. In fact, if you don't kill the Queen and have to flee the country (i.e. start a new game), then all of your squad will probably be viewed in much the same light as these 6 by the international community. It is a fine line between mercenary and terrorist, and this game (right from vanilla v1.0, yo) does indeed dabble in muddying that line quite a bit.

So . . . maybe you should let them live . . . for a while longer. After all, it's the Queen who's the real terrorist here, but the victor writes the history.

Just a thought, only a thought. Think about it. 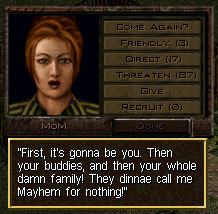 Don't you want her on your side against the Queen's Army? 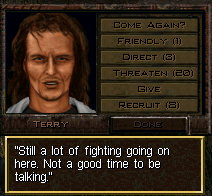 I just don't understand why people want this guy instead of Mayhem. (smh)

Things that make you go hmm. . . . Imagine for a moment a team of Mayhem & Meltdown! Listen to Buzz in the background laughing, saying "Can I join? You'll need cover." as she brandishes her brand-new light machine-gun from Bobby Ray's. Then . . . the gravelly grumble of Stella, "You're fighting for a cause I believe in!"

Ayup. I think I got the idea for my next project -- Mayhem & Meltdown, Armageddon in Arulco!