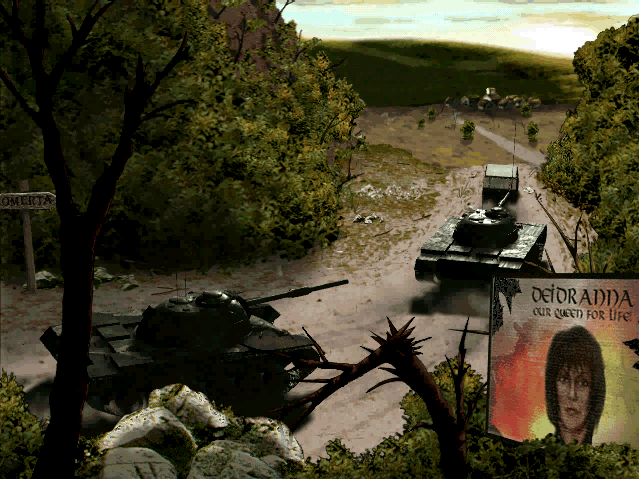 PLEASE NOTE: I AM CURRENTLY UNABLE TO SIGN IN TO REPLY TO COMMENTS. PLEASE USE THE BEARS PIT FORUM TO CONTACT ME. I HAVE CONTACTED TECH SUPPORT BUT THEY HAVE NOT HELPED. IF YOU HAD TROUBLE DOWNLOADING UPDATE 2 PLEASE TRY AGAIN NOW. THANK YOU.


A note on the new recruitable characters:
There is a text file included in the download - NewRecruitables.txt - that details the recruiting interaction with all the additional recruitable characters in Arulco Vacations. For v1.10 Doreen Harrows is now recruitable after you finish the Factory Children quest (if you don't kill her!). See the text file for particulars. All total, Arulco Vacations includes the following characters who are now recruitable: Darrel Hick, Alish "Perko" Perkopoulos, Angel DaSilva, Maria DaSilva, Joey Graham, James "Skyrider" Bullock, Fred Morris, Matt Duncan, Oswald Johnston, Calvin Barkmore, Carl Tercel, Brenda Drake, Doreen Harrows, Annie (Matron of Mayhem), Chris (Imposter), Joe (Tiffany Eddie), and Jasmin (T-Rex). In addition, the following characters have been added from other mods: Rude Dog (from Urban Chaos Mod), Jerry Melo (from JA2.5 UB), Alberto Ruiz (from Vietnam SOG '69), and Jane Shepard (from Flugente's additional characters). Plus, the following characters are new to the M.E.R.C. roster: Rachel Thorne, Dr. Catherine "Knockout" Onorosa, Dr. ZoRutha Jones, and Guido Grimaldi. All the information specific to each character regarding recruitment is available in the included NewRecruitables.txt in the Docs folder, the Data-AV folder, and the main game folder (just in case you have trouble finding it). The two (2) new merchants (Etta Smith (Balime) and Ray (San Mona) have had their inventories greatly expanded with rare items.

Once I recover from making this mod I will detail all of the changes on this blog as time permits. 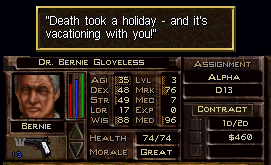 Arulco Vacations v1.11 comes in the standard VFS configuration, and will install alongside any and all other VFS mods you have installed without interfering with them. As usual, you must use the official Jagged Alliance v1.12 game with the Bear's Pit v1.13 r7609 Mod as a base for install.
DO NOT INSTALL ANY OF THESE FILES INTO THE "PROGRAM FILES" folder.

Use a clean install of JA2 1.12 with the stable v1.13 r7435 b7609 installed on top of it overwriting all files, and v1.11 of Arulco Vacations extracted over all of that, overwriting all files again (only one file will be overwritten -- the "ja2.ini" file, which sets the new game options). Using any other release, build or update is done at your own risk. I have not tested this with any other release, build or update. This v1.11 package is a 768MB zip file.

V1.11 of Arulco vacations includes Sevenfm's latest Experimental Executable at the time of this release -  ja2_7609en_AI_r946. I highly recommend using this executable to play Arulco Vacations. He has done a fantastic job on making the AI more intelligent - making for a much more enjoyable experience.

A major modification to the combat system is implemented in v1.11. The weapons designated "Rifle" and "Assault Rifle" have been changed so that all rifles that use a full power battle rifle cartridge (7.62x51mm and 7.7x56mmR, for example) are now designated as "Rifle". All weapons that use an Intermediate cartridge (5.56x45mm and 7.62x39mm, for example) are designated as an "Assault Rifle". This change is because the tactical role of Battle Rifles and Assault Rifles are entirely different. 'Battle Rifles' are either semi-automatic or select-fire in nature (although most of them are actually not controllable in full-automatic), firing a non-intermediate, full-power cartridge, and being considerably longer and heavier, and offering a long range tactical option. 'Assault Rifles', on the other hand, are meant to be used at shorter ranges and to be used in burst or automatic mode. While I would be happier with 8 to 10 different designations for all the weapons included within these two designations - I have to work with what the game provides. What this means in-game is that characters will now have a wider assortment of 'rifles' they can use without incurring the 'assault rifle penalty'. To even the playing field with this new modification all 'Battle Rifles' have had their Automatic Fire Penalty increased to reflect in-game that they are to be used in automatic mode in extreme circumstances only.

Please note that I use the terms "Battle Rifle" and "Assault Rifle" in the following context:

The denomination of "Battle Rifle" is given to any military service weapon that’s either semi-automatic or select-fire in nature (although most of them are actually pretty much not controllable in full-automatic!), firing a non-intermediate, full-power cartridge, and being considerably longer and heavier, and offering a longer range than intermediate caliber selective fire rifles ("Assault Rifles").

As well, other aspects of the combat system have also been further modified in v1.10. These include, but are not limited to, Accuracy, Recoil, Range, Reliability, Handling, and Ready Time. Scopes have been re-worked to reflect that the increased handling of sniper rifles is due to the power of the scope, not (usually) to the inherent construction of the rifle. Therefore, scopes now have a Handling Penalty Modifier that applies to the weapon they are attached to. Scopes also make it more difficult to track a target - both penalties increase with the power of the scope. Other sights have also been modified to more accurately reflect their real-life qualities.

The above is just a small example of the modifications that have gone into the making of Arulco Vacations, and v1.11 in particular. There are very many more throughout all aspects of the game.

Arulco Vacations
Install Directions
and Download Links
v1.11 will break your saved games from previous releases of Arulco Vacations. You will have to start a new game.

DO NOT INSTALL ANY OF THESE FILES INTO THE "PROGRAM FILES" folder.
Use the "Options" button in the installers to make a new folder named JA2 or whatever name you like -- but not anything similar to "Program Files".


The Step-by-Step Instructions for a Clean Install

4) Run the zPatch.bat file found in the main game folder.


6) Create a desktop launcher icon for Arulco Vacations pointing to the latest "ja2_7609en+AI" executable (r946 is included in this install), and using the included AV icon in the main game folder.
. . .
7) Start game, enjoy, kick ass.

These are the Default Options
Arulco Vacations was designed to use.
You have to set these up yourself
whenever you start a new game:

Lock and Load! It's time to rock and roll!

There are no additional downloads at this time.

Play. Enjoy. Visit me here at arulco.blogspot.com for lots more info and to contact me with any problems, and especially your impressions and wishlists!

I am also frequently at The Bear's Pit where there is a special topic forum for Arulco Vacations. It is the forum for JA2 fans!

As well, there's a FaceBook page for Arulco Vacations where we can also discuss changes and additions to Arulco Vacations. See you here, there, and some other places too!

Arulco Vacations is not compatible with other mods of v1.13. it was designed to be installed alongside the 2014 Stable Release of v1.13, otherwise known as release 7435 build 7609.


Nothing to see here except some old graphics not in use at the moment: