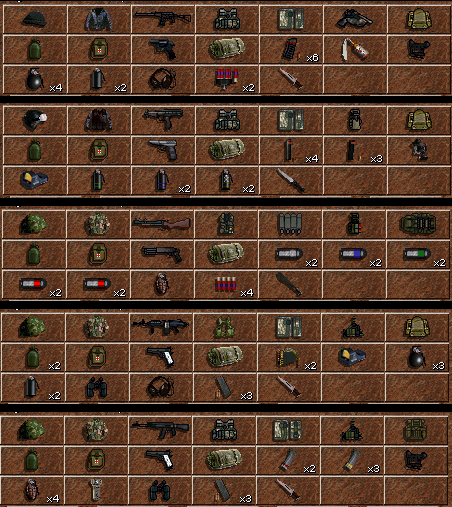 This page has not yet been fully updated to reflect changes in v1.06 in Arulco Vacations

All named characters have completely new gear kits. Every gear kit for mercenaries recruited from A.I.M. and M.E.R.C. have been maxed out. These guys and gals will get to Arulco ready for war! No more "Hey, I brought a pistol and two magazines" nonsense. Now it's "Yo, you sure you can carry all that?" 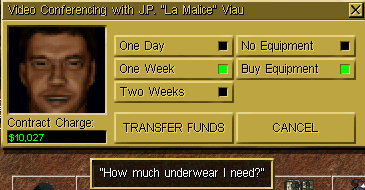 Truth is, with the random ability scores you might have to help the old guys like Moses and Pops, but with their normal Strength score they can manage just fine. Now, the old guys (like me) still thinking they are young and strong is just like real life, ain't it?

Re-designing the gear kits was a monumental chore. It took me a month of hard work of long hours every day. There were times of immense frustration because the game would do weird things with the gear because it does not recognize all the available pockets. However, once you land you can re-distribute the gear in the correct pockets and all will be well. 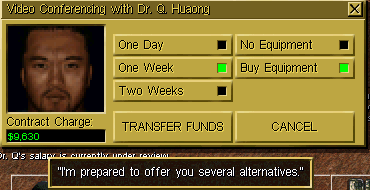 One of the weird things the game would do during the design was not give all, or sometimes any, of the Regeneration Boosters or the Antidotes. There seems to be some hard-coded issue about that which I could not quite figure out. Therefore not all medics come prepared with those drugs.

Another weird thing has to do with grenades, especially 40mm grenades . . . sometimes it gives out less, sometimes it gives out a lot more! You may find that a hired merc has more than you thought he/she was bringing. I made a big effort to make sure you would not get less. Let me know if you get less than you paid for. I don't imagine you will complain too much about getting more . . . 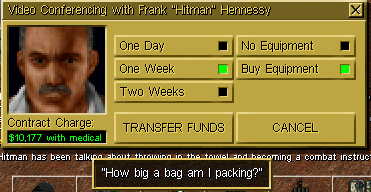 The same goes for some other items also -- there seems to be some limit imposed by the game on certain items regardless of the space available.

Another weird thing I tried very hard to eliminate is that sometimes the game would attach 3.11/MOLLE items, and those attached items would work but would be inaccessible for detachment. In other words, the attached items became a permanent part of the item they were attached to. I think I eliminated all such occurrences by using other gear.

I researched every character's background and series history in order to give them a gear kit I thought they would actually design for themselves. They all have brought full kits with them -- because this is a war, and not a walk in the park. I imagine they all want to come out of it alive. 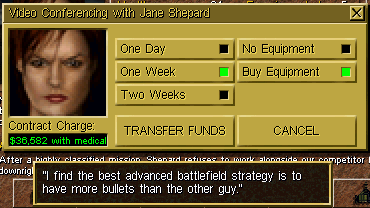 Yes, the more comical characters have more comical gear kits -- in keeping with their temperament. For example, Skitz brings the "Fuck You" t-shirt with him. I'll let you discover the rest for yourselves.

If you think these gear kits are too powerful . . . just play a while . . . the Arulcan Army will disabuse you of that notion. As well, this is not a fantasy role-play game where you start out a peasant and work your way to be a legend. This is a modern squad-level, strategy role-play game where most of the characters have already been on mercenary missions . . . and survived. I think they would have learned a little from past experiences and therefore will bring their battle-ready gear kit with them. As well, you have paid them enough at the start to purchase whatever they need from the local army-navy surplus store, internet military surplus warehouse, or direct from the manufacturers. It really annoyed me that so many of the characters previously would not even have a canteen or backpack! What? Where did they think they were going and for how long . . . downtown to the shopping mall for a couple of hours? 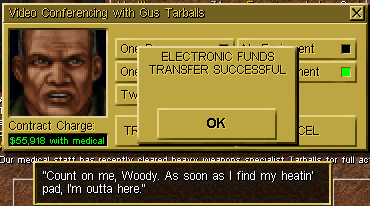 If you enjoy starting out with a pistol against pistol wielding enemies, and slowly work up through sub-machine guns to rifles to assault rifles etc., then this tweak is not for you. If you want to start out with a team of well-prepared professionals (even if they do have some, um, character eccentricities) and fight against an army that is fairly well equipped and trained . . . then this tweak is for you. 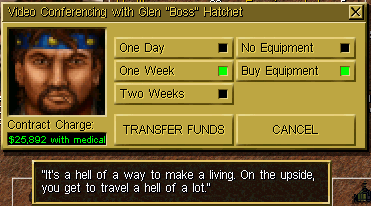 Even though you start out well-armed and well-supplied, except for armour, the trick is still to maintain your supplies in a hostile country. Even though you start out with lots more ready cash, these professionals you are hiring need more cash for all their gear. All the supply and economic difficulties of vanilla JA2v1.13 still exist but in a higher order of difficulty. Yes, the first battle is a cake-walk. My advice is to enjoy it while you can, and remember it with fondness. 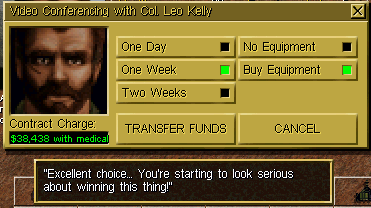 Some designers worry about Players hiring Mercs for a single day just to get their equipment. I don't. If a Player wants to game the system the only one hurt by it is them. It doesn't hurt me, nor does it affect the way I play or design. All games can be gamed one way or another. Besides, everybody is well-equipped in Arulco Vacations -- even your I.M.P.. If there's an item of equipment you'd rather have that is in somebody else's inventory that is your choice. The game is to be enjoyed -- play however you like. If it's too easy for you, let me know and I'll send you a tiny tweak to make it harder without taking anything away from you, and without any gamey AI cheats.

Oh, if you do hire a Merc for a day just to get their equipment then your reputation with the other Mercs suffers. It has always been like that in the Jagged Alliance series. That is part of the character interactions.

In case you are having economic difficulties, M.E.R.C., the More Economical Recruiting Center, is definitely more economical in Arulco Vacations than A.I.M., the Association of International Mercenaries. You will pay less for M.E.R.C. Mercs and their equipment -- to a lesser or greater degree depending on their Experience Level. The lower the Experience Level in both M.E.R.C. and A.I.M. the better the bargains available. However, in A.I.M. the bargains do not extend across all of a character's gear kits as they do in M.E.R.C.. That said, the better mercenaries available from M.E.R.C. are still expensive . . .
A note on the quality of the Gear Kits: all Gear Kits get better in quality (Item Status) from Standard to Premium (or left to right, as in M.E.R.C.). So even if two successive Gear Kits look very similar, the quality has increased a few percentage points in the one closer to the Premium kit (closer to the right). Experienced Mercs with a military background start out with higher quality (Item Status) gear than those without military backgrounds or with less mercenary experience. Mercs with military experience have 100% Quality (Item Status) in their Premium Gear Kits. Mercs who are Technicians or Engineers start out with higher Quality (Item Status) gear in their Standard kits than most others do. There are a couple exceptions to these rules -- there are always exceptions to all rules. The exceptions are based on the character's persona -- an example of an exception to the military quality is Lance. He may have been a member of the National Guard, been in the invasion of Grenada, and is an instructor at West Point . . . but he's not exactly what that seems to portray, is he? As well, don't expect Gasket to start out with the same Quality (Item Status) state as Boss or Vicki. In fact, expect Gasket to be an exception to most rules, and everything else for that matter. That's just how Gasket is. I love Gasket (except when I have Vicki), he's great fun, but he certainly is a singular character! 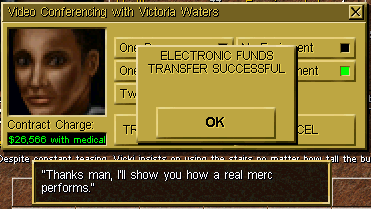 With every update to Arulco Vacations I am fine-tuning and tweaking these gear kits. If you have any input on any of these gear kits just leave me a message.